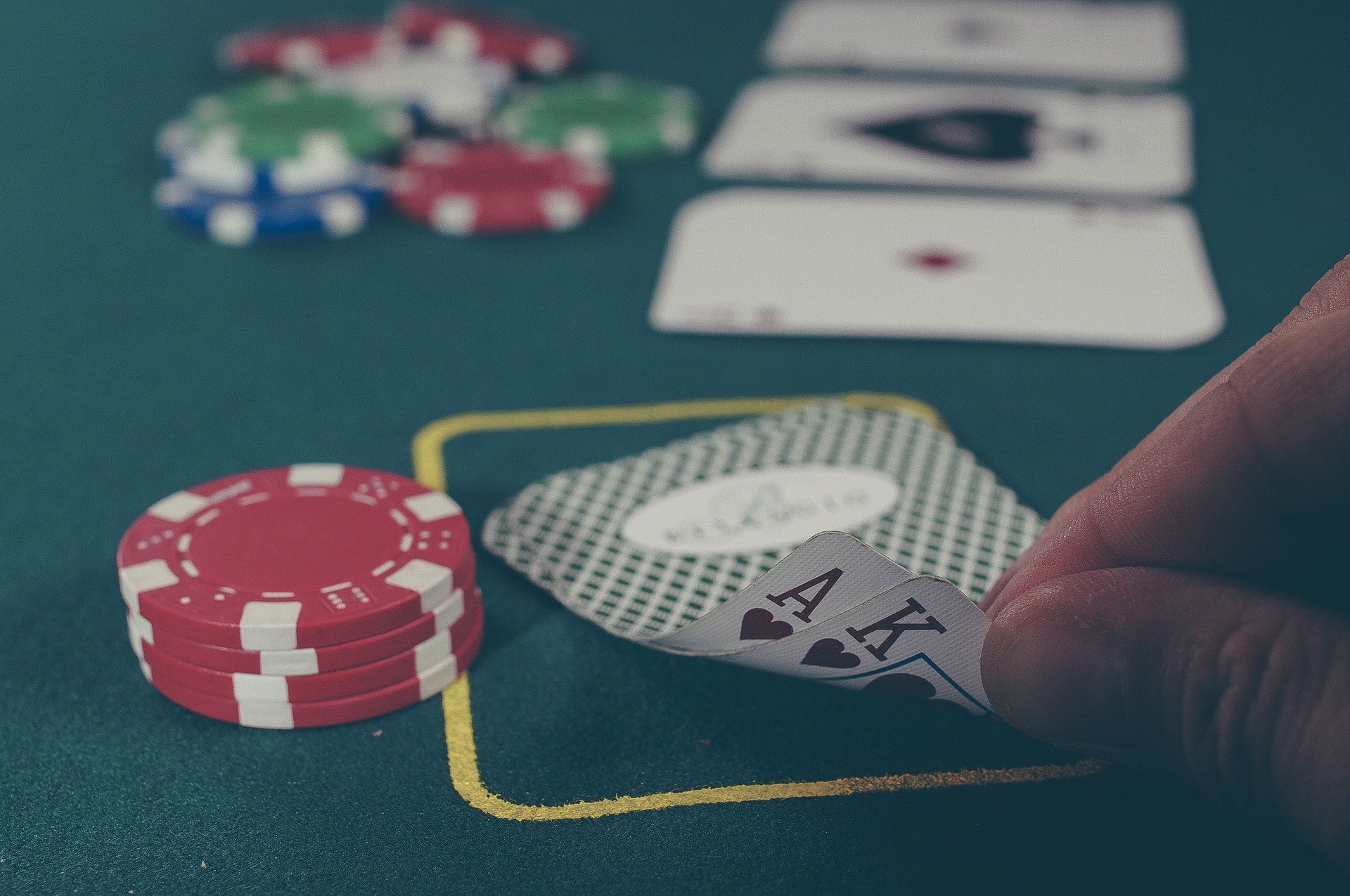 Psychology has a big role in how people perceive your website. In fact, loss aversion is a prime motivator for getting people to take action.

Did you know that the person who loses $100 is made degrees more unhappy, compared to the happiness of someone who finds $100? This is loss aversion in action – the experience or thought of a loss has a more powerful effect on us than a gain.

When you?re looking at website optimization, principles of loss aversion can provide you with some good potential for A/B testing. Perhaps there are elements of your copy you can reframe, or even images or other elements that can be switched around.

Let’s look at some of the important principles and ideas you can consider involving loss aversion:

The psychology of loss aversion

The human brain is powerful organ, and it turns out there are neurological explanations for our inherent aversion to any kind of loss. A 2007 study found that the regions of your brain which process value and reward may be silenced while you are assessing a potential loss, and activated when you assess a similar-sized gain. Overall, the brain showed a stronger reaction to possible loss, than to potential gain.

Of course, among the population some will have a stronger aversion response than others. Those who display greater neural sensitivity to both losses and gains tend to be very risk-averse. You probably won?t find them in a casino!

Loss aversion can be a key driver of human decision-making, which is why it is important to consider when you?re embarking on website optimization activities. Think about the things people are potentially averse to losing – lifestyle, health, livelihood – our instinct is to protect things we consider core needs first.

While you can never assume exactly how people will react, overall, humans exhibit predictable sets of behaviors. This can help you to come up with hypotheses for A/B testing, particularly if you have a good grasp of who your target audience is.

There are a number of behaviors or psychological principles that are related to loss aversion. These are also important to consider any time you are testing or making updates on your website. Behaviors such as these provide you with clues about how to frame elements:

A characteristic common to many humans is a reluctance to go through any sort of change. This ?status quo bias? is related to loss aversion – what if the switch to a new supplier costs them more than they bargained for?

Fear of regretting making the wrong decision also plays a role. Overall, we like to be ?winning? and to feel that our decisions are helping to get us ahead. This is one reason why people might stick with the same provider for a long time, even when there are clear benefits to making a switch.

When it comes to website optimization, it?s important to understand these emotional factors. For example, if you offer subscriptions of some kind, how will you reassure people that the decision to go with you is low-risk? How will you highlight that the potential gain far outweighs any perceived loss?

How choices are framed

In this article on Wheel of Persuasion, an interesting phenomena is observed. Imagine the scenario of a deadly outbreak, coming to your country, with two possible options to choose from to tackle the disease:

Framed as a loss

Framed in this way, 78% of us take the bigger risk and choose Option B1.

Framed as a gain

When framed as a gain, 72% of people choose option A2.

As you can see, these options are exactly the same and have the same outcomes, the only difference is the framing. When the choice is framed as a gain rather than a loss, our preference shifts to the less-risky option.

A post on Medium highlights the following points, which play out in the scenario above:

?(1) the prospect of losing a potential gain creates feelings of loss aversion, and (2) people may actually seek risks when facing near-certain losses. In other words, whether you are facing a gain or loss, and whether you think it?s high- or low-probability, influences your behavior.?

How you frame the choices people have to make on your website can make a difference to conversions.

The possibility effect is another related principle. It occurs when low probability events are given much more weight than they justify. For example, if I go out and purchase a lottery ticket, I?m focusing on the very slim possibility that I?ll hit the jackpot, and not the fact that I might waste $5 on a ticket.

People will often overestimate the probability of an unlikely event occurring, so are often willing to go ahead and take up offers, particularly if framed as a gain. When I go and buy a lottery ticket, I?m dreaming about what I?ll do with the winnings, not focusing on parting with a few dollars.

Flipped around to a potential loss rather than a gain, people can respond by taking the risk averse option. For example, let?s say you are selling expensive security systems in a town with a low crime rate. One way to sell them would be to tap into people?s natural aversion to loss. If there is a 3% chance that their home will get broken into, but they could lose priceless heirlooms in the event, they?ll probably be inclined toward installing the system.

This is captured in a matrix known as the ?Fourfold Pattern?, found in the book Thinking Fast, And Slow, by Daniel Kahneman: 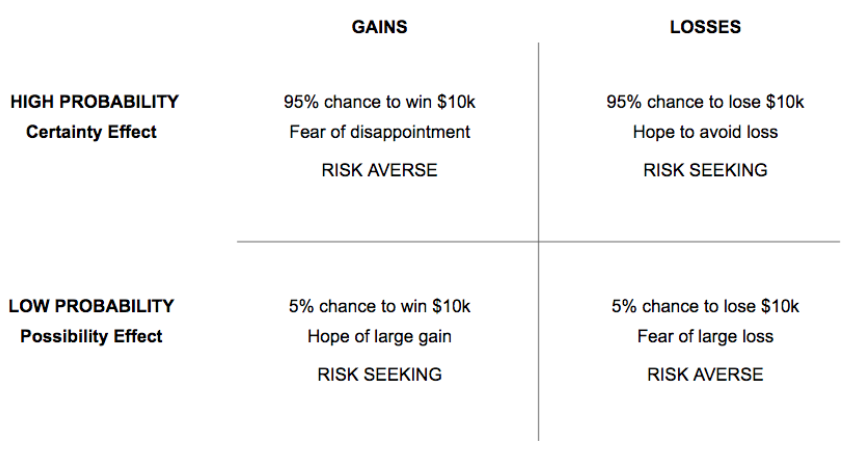 You can see in the matrix above that the ?certainty effect? is at the opposite end of the scale to the possibility effect. This means that events with high certainty are given much less weight than is justified.

If there was a high chance that my lottery ticket would be a winner, perversely, I might focus on the fear of disappointment if I didn?t win, leading to a decision not to buy a ticket.

On the other hand, if it were framed as a high chance that I would lose my money, I might hope to avoid the loss and take a riskier decision. You see this sort of thing play out in businesses that are struggling. People will keep putting money into a venture that is not working, hoping that they can turn it around and avoid a loss.

As with anything to do with website optimization and A/B testing, it?s up to you to test and see if theories hold true among your own customers.

There is strong precedent for ecommerce websites. A study conducted by Daugirdas Jankus on a high-traffic ecommerce site (21,000 weekly sessions), pitted different cognitive biases against one another. He included; loss aversion, the countdown effect, the bandwagon effect, the gain effect, and a control (no effect) variation.

The results were a clear win for loss aversion. This strategy achieved the highest conversion rate and the highest mean scores for maximizing page views.

Jankus? test included messaging to trigger each of those cognitive biases on a food delivery platform. These are good examples to highlight how you might test loss aversion on your website. Specifically, messaging included:

We all tend to be highly motivated to avoid feelings of loss or regret, so playing into this can be a good way to optimize your website.

Think about how you are framing offers, how products are presented, and how you reassure people they are making a safe choice.

A/B testing is a very good option to discover what resonates well with your target audience. Look for key messaging and consider how you can test it against various cognitive biases.

Are your A/B test results not as positive as expected? Sometimes the real culprit is a natural aversion to change. Here?s what you need to consider:
Recent Posts
Categories
Recent Posts
Recent Comments
Archives
Categories
Meta
Copyright Your Business LLC. - All Rights Reserved
This website uses cookies to improve your experience. By using this site, you agree to our use of cookies. Accept Read More
Privacy & Cookies Policy

Examples of Framing for Loss Aversion